Vancouver, British Columbia | Sandstorm Gold Ltd. (“Sandstorm” or the “Company”) (NYSE MKT: SAND, TSX: SSL) is pleased to announce that the Company has sold approximately 12,700 attributable gold equivalent ounces1 during the second quarter of 2017. In addition, new high grade gold-copper intercepts from ongoing diamond drilling at the Hot Maden project in north east Turkey (“Hot Maden”) have been reported and continue to confirm the internal continuity of gold-copper mineralisation within the Main Zone resource area and verify the additional resource potential south of the main deposit. Sandstorm has also amended its Normal Course Issuer Bid (“NCIB”) to allow for the purchase of its common shares through the facilities of the NYSE MKT or alternative trading platforms in the U.S.A., in accordance with U.S. federal securities laws and as further described herein.

The Hot Maden assay results have been reported from two drill holes. HTD–111 is a step-out core hole drilled along the southwest side of the southern zone and HTD-128 is an infill core hole drilled within the Main Zone.  Highlights from these drill results include:

As of July 3, 2017, the total amount of drilling for the year stood at 14,286 metres completed in 40 holes, with three additional holes in progress. 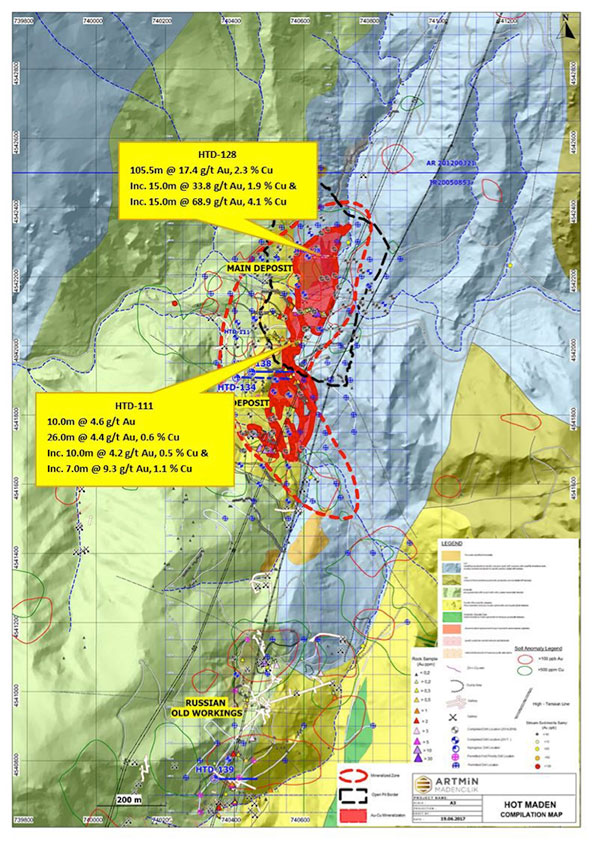 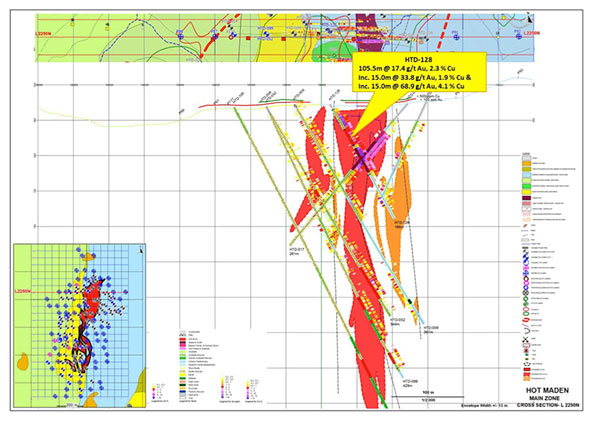 The Toronto Stock Exchange (“TSX”) has accepted the Company’s amended notice (the “Amended NCIB Notice”) with respect to the Company’s NCIB which was originally approved by the TSX on March 31, 2017 and pursuant to which Sandstorm may purchase up to a maximum of 7,597,730 of its common shares over a 12-month period in accordance with TSX rules and applicable securities laws. Pursuant to the Amended NCIB Notice, purchases under the Company’s NCIB have now been extended to include the ability by the Company to also purchase its common shares through the facilities of the NYSE MKT or alternative trading platforms in the U.S.A. Purchases made by the Company through its broker over the NYSE MKT or such alternative trading platforms will be made in open market transactions at prevailing market prices or by other means in accordance with applicable U.S. federal securities laws.

The technical and scientific information contained in this news release has been reviewed and approved for release by Eric Roth, the Company’s Qualified Person as defined by National Instrument 43-101. Mr. Roth holds a Ph.D. in Economic Geology from the University of Western Australia, is a Fellow of the Australian Institute of Mining and Metallurgy (AusIMM), and is a Fellow of the Society of Economic Geologists (SEG). Mr. Roth has 25 years of experience in international minerals exploration and mining project evaluation.

Mineralised intervals presented in Table 1 are drill intersection widths and may not represent true widths of mineralisation. Drill core obtained from the diamond drill program was dominantly HQ-sized core with the remainder being PQ-sized core. All drill core was photographed and quick logged prior to sampling. Standard sampling protocol involved the halving of all drill core and sampling over generally 1 metre intervals (in clearly mineralised sections) or 2 metre intervals (elsewhere), with one half of the core being placed in a sealed sample bag and dispatched to the analytical laboratory for analysis. Samples have been analysed at ALS Laboratories’ facility in Izmir, western Turkey. All samples have been analysed for gold using a 30 gram Fire Assay with AAS finish (or Screen Fire Assay for higher grade samples), in addition to a 32 element ICP-AES analysis of an aqua regia digest. Samples in which ICP analyses returned greater than the maximum detection limit for the elements Ag (10 ppm), Cu (10,000 ppm), Fe (15%), Pb (10,000 ppm), and Zn (10,000 ppm) were reanalysed using the AAS analytical technique. Standards and blanks were inserted in to the analytical sequence on the basis of one standard for every 20 samples, 2 blanks in every batch, and one duplicate every 40 samples.

Sandstorm Gold Ltd. is a gold royalty company. Sandstorm provides upfront financing to gold mining companies that are looking for capital and in return, receives the right to a percentage of the gold produced from a mine, for the life of the mine. Sandstorm has acquired a portfolio of 160 streams and royalties, of which 20 of the underlying mines are producing. Sandstorm plans to grow and diversify its low cost production profile through the acquisition of additional gold royalties.