Vancouver, British Columbia | Sandstorm Gold Ltd. (“Sandstorm” or the “Company”) (NYSEAMERICAN: SAND, TSX: SSL) is pleased to announce that the Company has agreed to purchase an existing 2% net smelter returns royalty (“NSR Royalty”) on the producing Houndé gold mine in Burkina Faso, operated by Endeavour Mining Corporation (“Endeavour”). The NSR Royalty will be acquired from Acacia Mining plc for US$45 million in cash and covers the Kari North and Kari South tenements, representing approximately 500 square kilometres of the Houndé property package. Nearly the entire Houndé Mineral Reserve of 2.1 million ounces (as of December 2014) is located on the Kari North and Kari South tenements, including the Vindaloo deposit and most of the Bouéré deposit. The NSR Royalty acquisition is expected to close in January 2018.

Sandstorm’s President and CEO Nolan Watson remarked, “The Houndé royalty is a natural fit for the Sandstorm portfolio as the asset meets all of the criteria that we look for in an acquisition. Shareholders will benefit from an immediate 10% increase in cash flow per share beginning in 2018, Endeavour has proven to be an adept operator in West Africa and we’re extremely excited about the exploration potential on what is a massive property. The nearly 500 square kilometre area that applies to the royalty is one of the largest prospective land packages in Sandstorm’s royalty portfolio and Endeavour has committed tens of millions of dollars in exploration spending in the coming years to aggressively search for new ore. Sandstorm will be a direct beneficiary of that work.”

Houndé is Endeavour’s flagship asset and ranks amongst West Africa's top tier cash generating mines. The average annual production during the first four years of operations is expected to be 235,000 ounces of gold at an all-in-sustaining-cost of US$610 per ounce.

The Houndé project is located 250 kilometres southwest of Ouagadougou, the capital city of Burkina Faso. Infrastructure in the area includes a paved highway approximately 2.7 kilometres from the mine site, a 225 kV power line as close as 200 metres in some areas and a rail line that extends to the port of Abidjan, Côte d'Ivoire approximately 25 kilometres west of the deposit area.

Houndé is an open-pit mine with a 3.0 million tonne per year gravity circuit and carbon-in-leach plant. The gravity concentrate is processed through an intensive cyanide leach reactor followed by electrowinning to recover the gold. The carbon-in-leach feed is thickened and fed into a standard carbon-in-leach circuit. Construction of the project began in April 2016 and was completed in October 2017 ahead of schedule and below budget. Commercial production was declared in early November 2017, more than two months ahead of schedule following the rapid construction and ramp-up periods, with nameplate capacity achieved within weeks following the introduction of ore into the mill. Production results to date have exceeded design parameters including recovery rates which have averaged 95%.

The mineralization at Houndé is mainly quartz stockwork-style and is weakly to moderately pyritic. The Vindaloo trend, where the bulk of the Mineral Reserves have been identified, has been drill tested for a distance of approximately 7.7 kilometres along strike and up to 350 metres depth. The intrusion-hosted zones range up to 70 metres in true thickness and average close to 20 metres true thickness along a 1.2 kilometre section of the zone called Vindaloo Main. Volcanic and sediment-hosted zones are generally less than 5 metres wide. The entire mineralized package strikes north-northeast and dips steeply to the west. The mineralization remains open both along strike and to depth.

The Sandstorm NSR Royalty covers approximately 500 square kilometers within the highly prospective Birimian Greenstone belt. Exploration drilling resumed on the property in early 2017 following a two year period of inactivity and has confirmed the occurrence of high-grade mineralization at the nearby Kari Pump as well as other targets such as Bouéré, Bombi, Koho and Kari Fault. Endeavour has incurred approximately US$5 million in exploration spending during 2017 and has set an exploration budget of US$40 million to be spent over the next four years.

In 2018, Endeavour will undertake an exploration campaign on the Kari Pump target to test the continuity of the mineralized corridors and its extensions along strike and at depth. In addition, infill drilling will be conducted to delineate a maiden Indicated Mineral Resource at Kari Pump, expected to be released during the second half of 2018. Mineralization will also be tested at the Kari target with an exploration program on a large gold-in-soil anomaly.

For more information on the location of the exploration target areas refer to the following claim map: 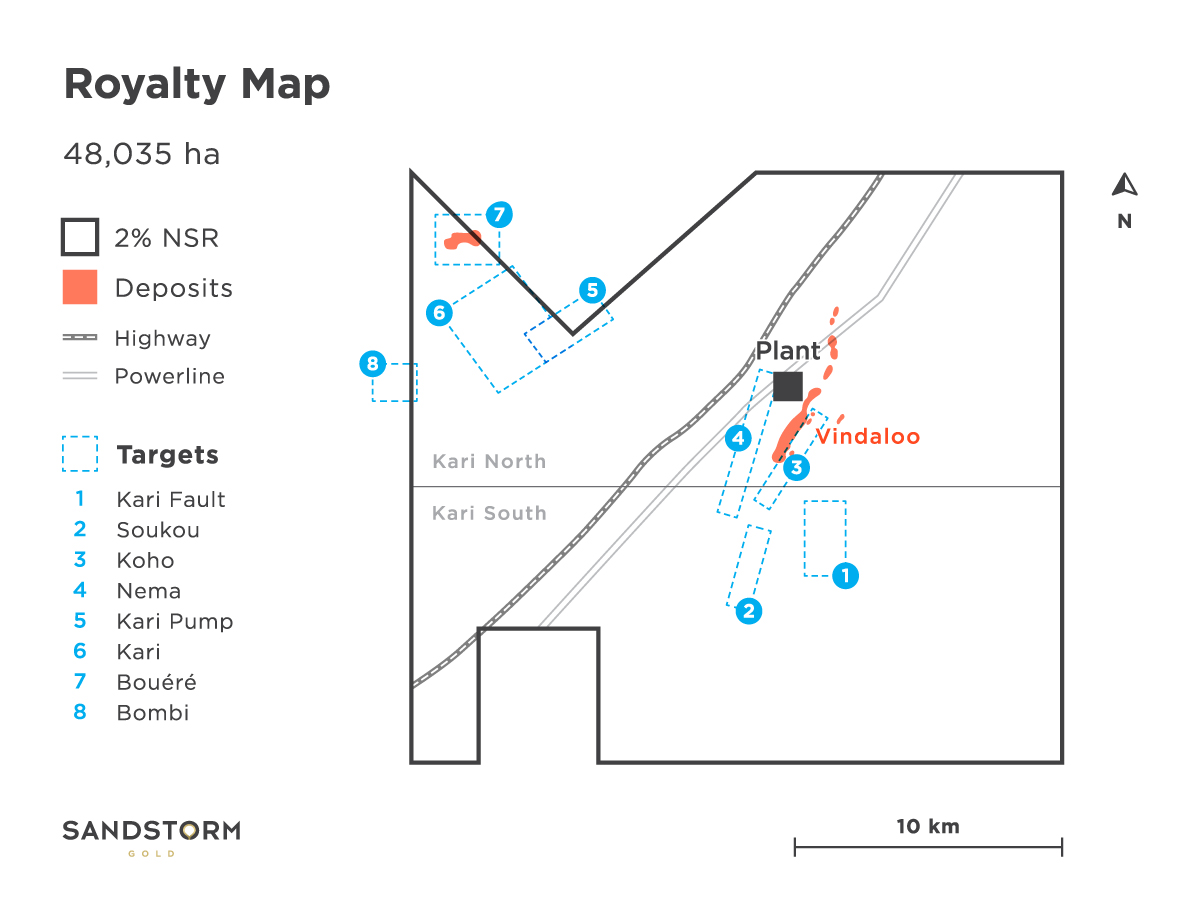 Mineral Reserves and Resources for the Houndé property are effective as of December 31, 2014.

Keith Laskowski (MSc), Sandstorm’s Vice President, Technical Services is a Qualified Professional (#01221QP) of the Mining and Metallurgical Society of America and a Qualified Person as defined by Canadian National Instrument 43-101. Mr. Laskowski has not independently verified the resource estimates contained in this disclosure. He has reviewed and approved the technical information in this press release.