The NSR Royalty was acquired from a private third party for US$32.75 million in cash and covers more than 644 square kilometres, including all 30 mining concessions held by Lundin Gold. The Fruta del Norte Mineral Reserve contains 5.0 million ounces of gold in 17.8 million tonnes (“Mt”) of ore with an average grade of 8.7 grams per tonne (“g/t”) as of September 2018, ranking it amongst the highest-grade gold projects in the world.

Click the link below to view the presentation that summarizes the Fruta del Norte royalty acquisition: www.sandstormgold.com/frutadelnorte

Fruta del Norte is one of the most significant gold discoveries of the past 20 years, ranking as one of the highest-grade gold projects globally. The project is Lundin Gold’s flagship asset and is located 139 kilometres east-northeast of Loja, Ecuador’s fourth largest city.

The project’s Mineral Reserves support average annual production exceeding 330,000 ounces of gold during the first 13 years at an estimated all-in-sustaining cost of US$583 per ounce. The operation is designed as a 1.3 Mt per annum underground mine. The process plant will use gravity, flotation, and carbon-in-leach (“CIL”) circuits to recover gold to both concentrate and doré, with combined metallurgical recoveries estimated at 91.7% for gold.

Fruta del Norte’s development is reported to be on time and on budget with the first gold pour expected during the fourth quarter of 2019. As of December 31, 2018, Lundin Gold announced that construction was 45% complete and the overall engineering was 85% complete.

A total of 4.5 kilometres of underground mine development was achieved at the end of 2018, with daily advance rates above target levels. Mine development has now reached the Fruta del Norte orebody, having passed under the Machinaza River and through the Machinaza Fault without significant water inflows.

Since the start of 2016, Lundin Gold has doubled the strike length of the Suarez pull-apart basin to 16 kilometres, identifying several new epithermal gold targets within this trend. While Lundin Gold has been primarily focused on development of the existing Fruta del Norte deposit, early exploration has also advanced on the Puenta-Princesa and Barbasco targets among others.

Outside the Suarez pull-apart basin, Lundin Gold has identified several additional exploration targets, highlighting the prospective nature of Lundin Gold’s mineral concessions. The targets include epithermal gold-silver targets such as Gata Salvaje and the Emperador area as well as a variety of copper porphyry targets. 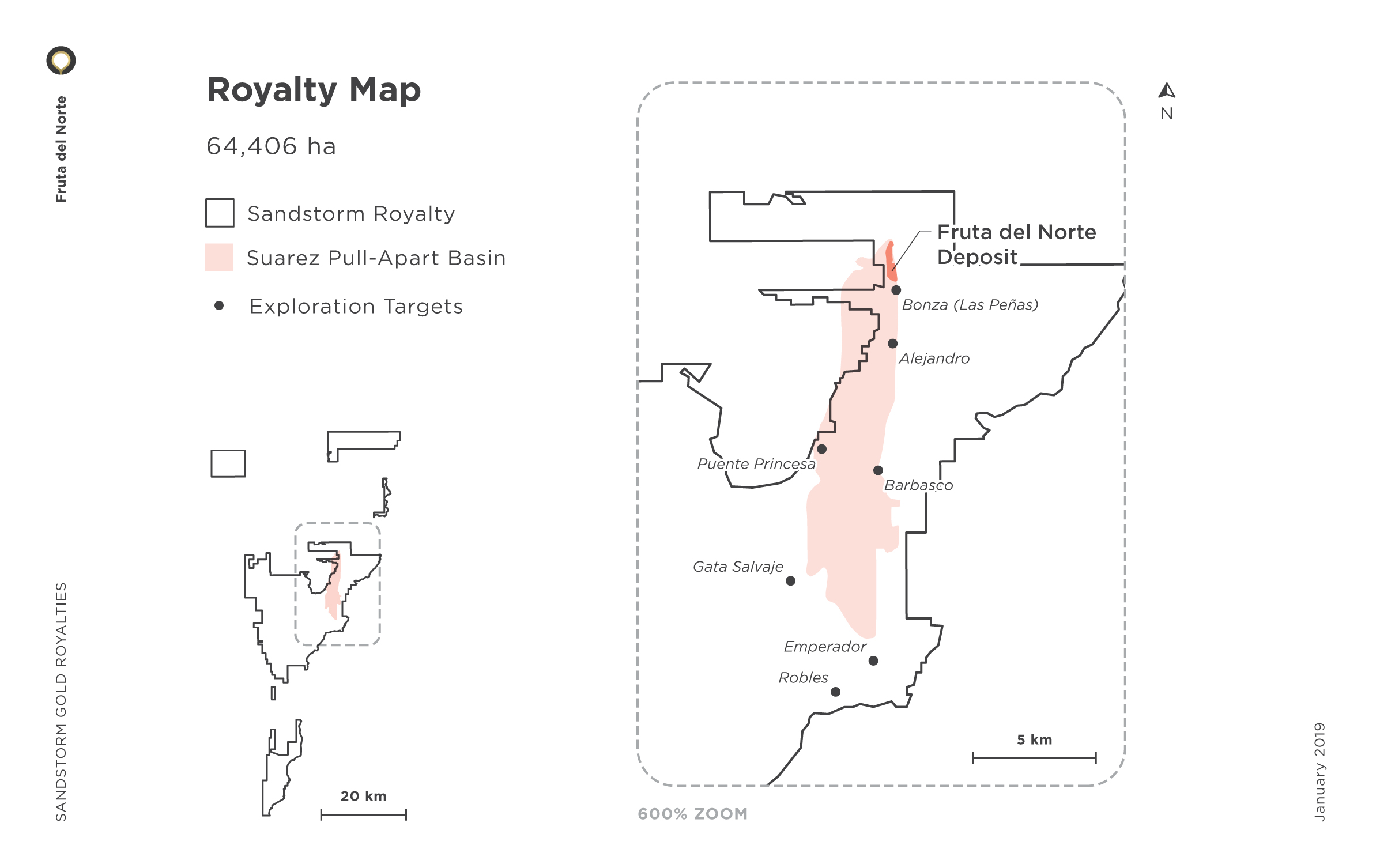 Lundin Gold released an updated project estimate (“UPE”) on September 19, 2018, which involved a thorough review of the mine plan, a re-estimate of the capital and operating costs, and an update to the project schedule. The UPE should be read in conjunction with the Technical Report entitled "Fruta del Norte - NI 43-101 Technical Report on Feasibility Study" (the "Technical Report") filed by Lundin Gold in June 2016, with an effective date of April 30, 2016.

Sandstorm is a gold royalty company that provides upfront financing to gold mining companies that are looking for capital and in return, receives the right to a percentage of the gold produced from a mine, for the life of the mine. Sandstorm has acquired a portfolio of 188 royalties, of which 20 of the underlying mines are producing. Sandstorm plans to grow and diversify its low cost production profile through the acquisition of additional gold royalties.

This press release contains "forward-looking statements", within the meaning of the U.S. Securities Act of 1933, the U.S. Securities Exchange Act of 1934, the Private Securities Litigation Reform Act of 1995 and applicable Canadian securities legislation, concerning the business, operations and financial performance and condition of Sandstorm. Forward-looking statements include, but are not limited to, the future price of gold, the estimation of mineral reserves and resources, realization of mineral reserve estimates, and the timing and amount of estimated future production. Forward-looking statements can generally be identified by the use of forward-looking terminology such as “may”, “will”, “expect”, “intend”, “estimate”, “anticipate”, “believe”, “continue”, “plans”, or similar terminology.

Forward-looking statements are made based upon certain assumptions and other important factors that, if untrue, could cause the actual results, performances or achievements of Sandstorm to be materially different from future results, performances or achievements expressed or implied by such statements. Such statements and information are based on numerous assumptions regarding present and future business strategies and the environment in which Sandstorm will operate in the future, including the price of gold and anticipated costs. Certain important factors that could cause actual results, performances or achievements to differ materially from those in the forward-looking statements include, amongst others, changes in business plans and strategies, market conditions, share price, best use of available cash, gold and other commodity price volatility, discrepancies between actual and estimated production, mineral reserves and resources and metallurgical recoveries, mining operational and development risks relating to the parties which produce the gold Sandstorm will purchase, regulatory restrictions, activities by governmental authorities (including changes in taxation), currency fluctuations, the global economic climate, dilution, share price volatility and competition.

Forward-looking statements are subject to known and unknown risks, uncertainties and other important factors that may cause the actual results, level of activity, performance or achievements of Sandstorm to be materially different from those expressed or implied by such forward-looking statements, including but not limited to: the impact of general business and economic conditions, the absence of control over mining operations from which Sandstorm will purchase gold, other commodities or receive royalties from, and risks related to those mining operations, including risks related to international operations, government and environmental regulation, actual results of current exploration activities, conclusions of economic evaluations and changes in project parameters as plans continue to be refined, risks in the marketability of minerals, fluctuations in the price of gold and other commodities, fluctuation in foreign exchange rates and interest rates, stock market volatility, as well as those factors discussed in the section entitled “Risks to Sandstorm” in Sandstorm’s annual report for the financial year ended December 31, 2017 and the Company’s annual information form dated March 29, 2018 available at www.sedar.com. Although Sandstorm has attempted to identify important factors that could cause actual results to differ materially from those contained in forward-looking statements, there may be other factors that cause results not to be as anticipated, estimated or intended. There can be no assurance that such statements will prove to be accurate, as actual results and future events could differ materially from those anticipated in such statements. Accordingly, readers should not place undue reliance on forward-looking statements. Sandstorm does not undertake to update any forward-looking statements that are contained or incorporated by reference, except in accordance with applicable securities laws.